For some time, Fiat Chrysler Automobiles has focused on developing SUVs, and they are moving from small and mid-size cars which used to be their prior goal. One of the most important vehicles that will be produced is Jeep Grand Cherokee which defines this brand. The ongoing model has been with us ever since 2011 and it is time for Jeep to overhaul this vehicle. So, we believe that the Grand Cherokee will get a special treatment for its 25th birthday. We don’t know all the details but, here’s what the 2018 Jeep Grand Cherokee might look like.

The 2018 model will see some serious changes, but speaking of the exterior, it will only be updated a little bit. We expect the larger seven-slotted grille with taller openings and small headlights in accordance with the IIHS’s standards. The front bumper should remain the same, and its tapered edge design should aid the vehicle’s approaching angle. Since this is an off-road SUV, exposed tow hooks are a great detail, and they are functional as well, while the fog lights are not mounted at the bottom of the bumper, but they are positioned higher.

On the sides the 2018 Jeep Grand Cherokee boasts sharp lines, which adds aggressiveness and in order to improve the aerodynamics, the windshield is sloped back, but this decision doesn’t affect the interior space. Jeep will probably offer 17- to 20-inch wheels and it is expected that the new SUV will have a great amount of ground clearance. For those who plan to go off-road often, underbody skid plates are optional on all trim levels and standard on the Trailhawk.

There is no doubt that the interior of the new 2018 Jeep Grand Cherokee will be redesigned and upgraded. First things first, the dashboard in the current model is getting old, and its materials lack quality, so the dashboard along with gauge cluster might be all new. Secondly, Jeep’s models, including the Grand Cherokee, could come with the new generation of Uconnect system, which would be a major enhancement. In the cabin, there are two rows of seats for five passengers, and if you need to increase cargo area, you can fold the second row flat. The base trim will most likely come with cloth seats, but as you climb the ladder, leather, heated and cooled seats with massaging function are available.

Rumor has it that FCA is preparing a modified 3.6-liter Pentastar V6 engine, which is expected to be standard in the Grand Cherokee. However, the customers will get the 3.0-liter EcoDiesel powerplant that produces stunning 420 lb-ft of torque as an option. These two units will come standard in RWD, but for 4WD you will need to give extra $. Also in the lineup is the 5.7-liter Hemi V8 engine which is intended for higher trims and according to Jeep CEO Mike Manley, the Grand Cherokee SRT, which will be available only in RWD and is still going to be powered by a 6.4-liter naturally aspirated Hemi V8. Hopefully, the engineers will upgrade the optional air suspension which is stiffer than it should be. All of these engines will be paired with an eight-speed transmission.

Once it comes to the market, the 2018 Jeep Grand Cherokee will go head to head with the Toyota 4Runner and Volkswagen Touareg. Heavy investments in Jeep’s vehicles will hopefully pay off at the end. Besides working on this lineup, a new Ram 1500 is also being prepared. Nevertheless, we can’t wait to see the new Grand Cherokee on the road. 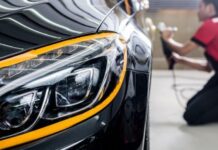 How Much Does It Cost to Have a Car Professionally Detailed?