The brand-new Opel Insignia will appear in Australia and New Zealand as a Holden Commodore, according to General Motors. This news was announced on Wednesday and the production of Commodore will end with the arrival of the new car.

The plant will stop the production of the Commodore VF in October next year. In addition, the donor of the Commodore’s Opel Insignia will also hit the US market as the next-generation Buick Regal and this is why it is important to know some basic information about the new Commodore.

First of all, it will start with the sales in 2018. The 2016 Chevrolet Malibu will borrow its lightweight E2XX platform to the new car. This means that the car will not feature a V8 engine and RWD, instead of which we will get an FWD, whereas an AWD will be optional.

Moreover, drive torque will also be between the rear wheels, not only between the axles, due to the pair of electronically-controlled clutch packs located on each side of the rear drive unit. Sensors send signals to the system monitors 100 times per second allowing the car to adjust to the conditions all the time.

Speaking of the engine, a twin-turbocharged V6 unit is a possibility, but it hasn’t been assembled yet. The top trim will contain a 3.6-liter V6 that produces 308 hp. The car will have a nine-speed automatic transmission. The other trims will come with less powerful 2.0-liter inline-4 powerplant, but it is known whether the engine will be a gasoline or diesel one.

It is expected that the 2018 Opel Insignia appears at the 2017 Geneva auto show, in March. It will be followed by Buick Regal and Holden Commodore as the last one. The Regal will probably be a conventional sedan, whereas the other two versions will come out as a liftback hatch or wagon. 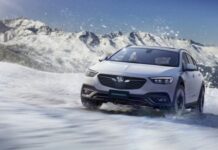 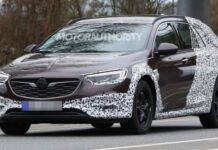 2017 Opel Insignia B Sports Tourer – What We Know So Far