Mercedes-Maybach has been revived for the second time three years ago, and it now offers five different models – the S500 and S600 sedans, the G650 Landaulet SUV, the S650 Cabriolet and the S600 Pullman. Furthermore, Maybach also introduced several stunning concept cars among which is the Vision 6, a vehicle that might be in showrooms in a few years. The Vision 6 has become a convertible, with Mercedes-Maybach stating that it is getting closer to production.

The Vision 6 Cabriolet is officially presented at the 2017 Monterey Car Week, but we could have seen several teaser images which led us to think of a completely different vehicle. Many people believed that Mercedes were to launch a new concept, but it was just Maybach getting rid of the Vision 6’s roof. It just proves that the carmaker has big plans for the Vision 6 and Maybach can even get a standalone model which will be more spacious and more upscale than the S-Class Coupe. Could the luxury car manufacturer bring back the old days, when it went against Rolls-Royce, Cadillac, and Duesenberg? We don’t know, but until (if) that happens, let’s take a look at the Vision 6 Cabriolet.

The Vision 6 comes without the roof, but its other design cues mostly remained the same and Mercedes didn’t bother to change too many details, which isn’t necessarily bad. The six-meter-long concept car is handsome with its sleek bodywork, long arched engine cover and a rear end which combines fastback and boat-tail design.

There is a big chrome grille with vertical slats at the front with “Maybach” lettering at the very top. The headlights are slim, and they feature three individual LED elements, whereas the sporty bumper with side vents adds aggressiveness to the concept. On the sides, the chrome strips are running along the beltline, which reminds us of the vehicles before the World War II. Chrome is also used for the side strake and the side skirts. The coupe has odd red-painted covers over the wheels, whereas the cabriolet has traditionally-designed wheels with multiple chrome spokes, which are modern and have a pre-War look at the same time.

The car’s rear segment remains unchanged, and the boat-tail V-shaped decklid is perfectly combined with the rest of the design. This kind of styling was popular back in the 1930s and numerous carmakers such as Cadillac, Auburn and Duesenberg used it for their models. Even though it looks fascinating, it is unlikely that we will see a production vehicle with this boat-tail rear end.

The exterior of the 2017 Mercedes-Maybach Vision 6 Cabriolet remains mostly unchanged, which is something we cannot say for the cabin. For example, the floating section of the center console, which shows the drivetrain’s electrical energy flow, is shorter in the Cabriolet. The dashboard is redesigned as well, while the A/C vents are unique and non-existent in the coupe.

The large wrap-around display which extends into the door panels is still here, while the center section behind the seats is not as futuristic as in the coupe. In general, the cabin of the Vision 6 Cabriolet is more elegant. The steering wheel is the same except for the chrome rim, and when you are not using the instrument dials, they look just like airplane turbines.

The floor is redesigned too, and instead of a simple layout, the wooden board which is separated by aluminum trim gives the cabriolet even more luxurious feel. The new decklid is featured, but it is wrapped in the identical material as the door panels, and the white upholstery combined with blue lights are just perfect. Nappa leather, open-pore wood, and aluminum were used for the interior, whereas touch-only controls are installed together with “the latest generation of biometric sensors record the state of mind and health status of the passengers.”

Mercedes-Maybach didn’t change anything under the hood, and the Vision 6 Cabriolet uses the same drivetrain as the coupe. The powertrain is all-electric, and it combines a flat battery located in the underbody with four permanent magnet synchronous electric motors. The complete output is 737 horsepower, and all that power is sent to all four wheels, allowing the vehicle to reach 62 mph in under four seconds. The top speed is limited to 155 mph, while Mercedes claims that the Vision 6 Cabriolet can go over 200 miles per charge.

The quick-charge function is used for the concept which allows an impressive charging capacity of up to 350 kW. In other words, you can charge the vehicle for five minutes and cover 62 miles after that, which is truly visionary. In order to charge the battery, you can use a public charging station, a domestic outlet, or wirelessly via an electromagnetic field.

All of this sounds extraordinary, and hopefully, we will see the Vision 6 Cabriolet in the production form. 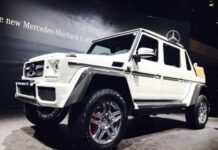 2018 Mercedes-Maybach G650 Landaulet Shown in Geneva, Only 99 Units Will Be Produced 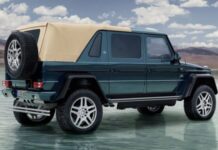