The upgraded 2017 Jeep Grand Cherokee Trailhawk has been introduced this week in Las Vegas. According to the company, the car will reach Australian market and it will be equipped with a 3.0-liter turbo-diesel engine.

The new revised Grand Cherokee will go on sale in Australia near the end of the first quarter or at the beginning of the second quarter of 2017. It is unlikely whether that the petrol version will reach that market, as Lucy McLellan, the FCA director of corporate communications, said.

It makes sense for Jeep to come out with a diesel option only since most of the Australian off-roaders pick diesel over petrol because it is more durable and tougher. The Summit Platinum was the top trim of Grand Cherokee and it was already offered in Australia which as a special edition. The new model grade will now go under the name of Summit. In Australia, the range of Grand Cherokee will consist of Laredo, SRT grades, Limited, Trailhawk and Summit.

McLellan believes that there will be a turning point in sales with the new range. He said: “Refreshed product, a refreshed approach to sales and marketing and most importantly customer service, will assist in turning around the recent downward trend in Grand Cherokee sales.” 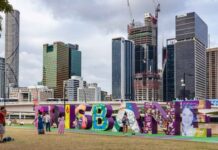 6 Things to know if visiting Brisbane city in 2021