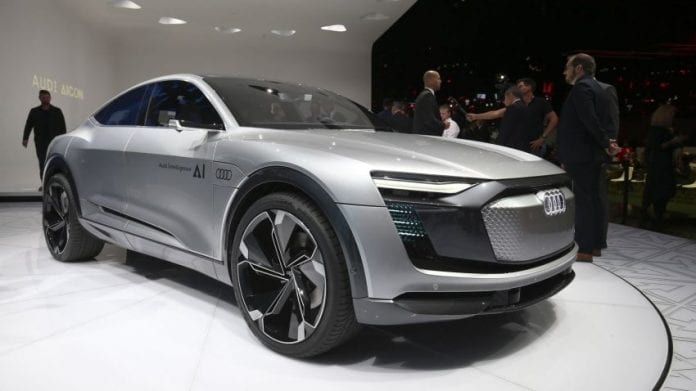 Audi has spent some time and resources to develop this futuristic all-electric sports car named the Audi Elaine. This model can drive itself, but despite that, the German company installed steering wheel and pedals for people who like to be in control and who just find driving enjoyable. The Elaine is a muscular “SUV Coupe” which is slotted close to the Audi A7 in the lineup, but is this model the future of the electric sports cars?

Does the Elaine’s exterior look familiar to you? Don’t be surprised because you might have seen something similar on the Audi e-Tron Sportback which was introduced at the Shanghai Auto Show. With the official name given to this car, the possibility for it to reach production sometime in the future has increased slightly, but don’t expect it to have so much technology and don’t expect it soon.

Since the exterior is not completely new, there is not much to talk about here. The Audi Elaine comes with the same hood, LED exterior lights and muscular body lines on the side profile. This vehicle sits on the 23-inch wheels which are carried over, whereas the size and weight of the car indicate that the Elaine would compete in the same segment as the Audi A7. Interestingly enough, the car is difficult to define as it is an SUV, which sits close to the ground, so Audi marked it as an “SUV Coupe.” Truth be told, it is an electric sports sedan, but let Audi has its way.

The cabin of the Audi Elaine is futuristic, and its beauty is irresistible as it lures you inside. It features the cutting-edge technology such as the PIA assistant which allows the model to combine data and information from the outside sources and from the driver to find the best routes. The PIA system gradually learns about the driver and later helps him/her with the navigation, parking location selection, air condition preferences as well as music choice based on driver’s mood and behavior. This data is stored in the company’s cloud via myAudi account, but you can delete or edit the information whenever you want.

Other than that, the new Audi Elaine has the large infotainment display and digital HVAC controller which are carried over, unlike the instrument cluster which shape has slightly changed. Speaking of the instrument cluster, you can customize the color according to your own liking. In the meantime, the touchpad controller is repositioned further forward unlike the one in the Quattro concept, whereas the HVAC controller is located higher and is angled more toward the driver. The same goes for the infotainment display.

The disappointing part of the interior are the seats which provide limited support, and almost no side support. To spice things up and add the elegant touches to the Elaine’s interior, Audi used black Alcantara for the armrests, door panels, center console side panels and the carpeting. The steering wheel is sporty with the flat top and bottom, side spokes at three and nine O’clock and a hexagonal shape.

The e-Tron Sportback Concept’s drivetrain is also used for the Audi Elaine. What does that mean? Well, a 95-kWh battery is lined on the floor, and it delivers around 310 miles of range on the NEDC test cycle. There are two ways to charge this battery – via a wired connection as high as 150 kW or via Audi’s wireless charging system. The German manufacturer installed two motors at the rear axle, and one at the front with the total system output of 320 kW or 429 ponies. You can choose the boost mode which will sacrifice a bit of range to increase 429 horsepower to 496 for a short period of time. That can be fun from time to time.

The 2017 Audi Elaine can reach 62 miles from a standstill in 4.5 seconds, while the top speed isn’t mentioned but we assume it is limited to 155 mph, the number we often see with the Germans. Since the Elaine is an all-electric vehicle, there is a possibility that you can disable the front motor for a while and experiment with the RWD. Considering there is a new-generation AI processor inside the vehicle, autonomous highway driving is an option. In other words, the car can drive in its own lane, switch lanes and adapt to traffic if you are going between 37.3 mph and 80.8 mph.

The Audi Elaine is just a concept so far, but it is designed in a way that we may actually see the production version in the years to come. It is just a matter of time. Surely, the company would take more than a few years to make all this technology work flawlessly and make the car reliable. The biggest problem is that certain parts such as side-view cameras still haven’t passed regulatory approval in the United States. If Audi really wanted to produce the Elaine, it could do so at the beginning of the new decade. And why not? We would love to see this all-electric model on the streets. Would you?