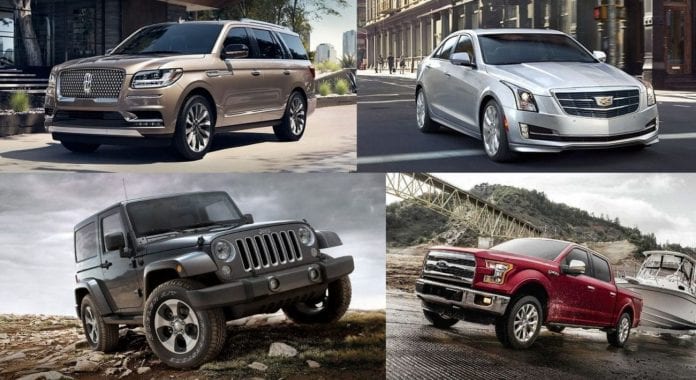 Americans are a proud nation, and they love cars. Plus, they also know how to produce a good vehicle, and there are so many successful US companies that are selling their products on the world market. The term “American vehicle” can be difficult to define, and we need to take into consideration the state in which the car is produced as well as the origin of its parts. Let’s get down to business as we present you the 10 most-American Cars in 2017.

Ford has a lot of vehicles that can be on this list (some of them are), but the one we will start from is the Ford Taurus – the best-selling sedan produced by Blue Oval. This sedan houses a 3.5-liter V6 engine good for 288 horsepower, but the buyers can go with a 2.0-liter EcoBoost I4 that generates 240 hp. The performance variant of the Taurus is called the SHO and under its hood lurks a 3.5-liter EcoBoost V6 rated at 365 ponies. If you like, you can get the AWD system, but the FWD is a standard one.

For those who find the Suburban too expensive, perhaps the best choice would be the new Chevrolet Traverse. This model has not been modified since 2014 which means that it comes with three rows of seats that can carry eight passengers in total. The unit powering this vehicle is the older version of the 3.6-liter V6 that delivers 281 hp and 266 lb-ft of torque, but you can opt for the AWD and replace the standard FWD system. Don’t rush into buying this vehicle because the new generation will be introduced in 2018 and modernize everything from engines to interior materials and features.

The 2017 GMC Acadia is smaller and lighter than we got used to, but people react positively to this vehicle. The base model comes with a 2.5-liter I4 that produces 193 horsepower, but there is a more powerful engine available – a 3.5-liter V6 good for 310 hp. These units are mated to a six-speed automatic gearbox which is the only one available within the range, but you can choose between a standard FWD and optional AWD.

Ford F-150 has been one of the best American models lately, and it carries the title of the top-seller in the country. You cannot go wrong with the F-150 as it is equipped with the best cab, engine, drivetrain, bed, and features. We expect a refresh in 2018, but not much will be changed because Blue Oval has found a winning combo.

Oh, yes, the mighty Wrangler. The car with the history dating all the way from WW II. It is produced in Ohio, and this model is equipped with a 3.6-liter Pentastar V6 that produces 285 ponies and 260 lb-ft of torque. It comes with a 4WD as standard, whereas the off-road aficionados can opt for the Rubicon version. The Wrangler is available as a two-door vehicle while the four-door model Unlimited is also offered.

Chevrolet is a typical American manufacturer, and even though the influence of the European supercars is clearly visible on the next-gen Chevy Corvette, it is a vehicle that has to be on the list. This car hides powerful V8 engine that works together with an eight-speed automatic gearbox which sends the power to the rear wheels.

The 2018 Lincoln Navigator is expected to be launched by the end of this year, and the new model is definitely worth waiting for. However, if you are in need of a new vehicle, the 2017 model can serve you well, and it is truly a classic American car. The Navigator packs a 3.5-liter EcoBoost V6 that generates 380 hp and 460 lb-ft torque, and it is paired with a six-speed automatic transmission.

Cadillac ATS is the typical mid-size premium sedan that originates from the United States. It is available with four- and six-cylinder powerplant and the one we need to mention is the 3.6-liter twin-turbo V6 that powers the ATS-V. If you cannot decide which model to choose, the ATS with the AWD configuration is the safest bet.

The Buick Enclave shares an architecture with the Chevrolet Traverse, and they also use the same engine. The Enclave is the typical American car that everyone loves. The 2018 model is going to be introduced soon, and we cannot wait to see all the modifications and improvements.

Which American vehicle is your favorite?